In a recent piece by Matt Hayes of Bleacher report, Brian Kelly admits that he screwed up last year and accepts his responsibility for the lackluster season. He explains that he was pulled in many directions and that the team suffered as a result. Kelly was in the midst of fundraising for Norte Dame’s new football facilities, which in part lead to last season’s 4-8 debacle. This year he’s done with fundraising and refocused on bringing the Irish back to glory. He’s going to wake up the echoes, if you will. Full disclosure, if you read this blog, you likely know that I’m a Notre Dame homer. So, expect and accept the forthcoming bias.

Before you start decrying Brian Kelly, realize that the guy has averaged 9 wins per season (minus last year), taken the team to a national championship and was a field goal away from the College Football Playoff two years ago. That’s not too shabby. I enjoyed the Hayes article, it was an honest and fair depiction of Brian Kelly and the unique situation that Notre Dame head coaches find themselves in.

Unfortunately for us all, internet fuck-boys like Samer Kalaf from Deadspin exist. Kalaf, in my opinion, drastically twisted the words of Matt Hayes for the soul purpose of writing a Brian Kelly hit piece. After reading his dribble, I decided to repay the favor.

For all intents and purposes, my takeaway from the Hayes’ article was that he respected Kelly and that Note Dame fans should be hopeful for next season. Samer Kalaf on the other hand, took the words of Hayes and twisted them to near unrecognizable lengths. He then got up on his soapbox and used took pot shots at Brian Kelly.

By the way, Samer, this isn’t a funny joke: “This excuse is elite, starting-caliber, projected to be drafted in the second round.” I’m sure it sounded hilarious in your head. It wasn’t.

I know that it’s “cool” to hate Notre Dame and yes, Hayes’ takeaway was that Brian Kelly had not changed. However, in Hayes’ closing statements he painted those traits in a positive light. Instead, Kalaf chose to bastardize the words of Matt Hayes for his own troll-like take.

“Notre Dame is working on a top-10 recruiting class, according to Scout, and Kelly says the administration has told him renovations of the athletic complex are expected to begin as soon as 2018. A few hours after the first practice of the spring, he’s back in the football offices with a pep in his step. Junior quarterback Brandon Wimbush, the projected starter, is throwing darts all over the practice field.

“Did you see that?” Kelly says with a wide grin. “The ball just jumps out of his hand.”

He’s not pulling back now or anytime soon.

For anyone or anything.”

Check out these shirts! 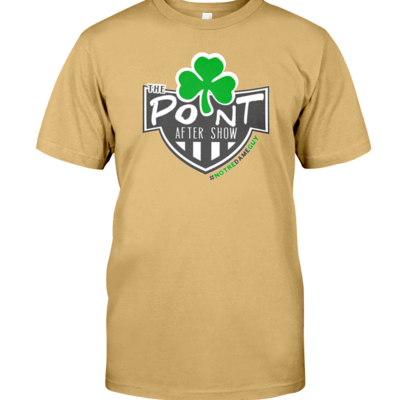