Pedro tried to put Chelsea on his back. 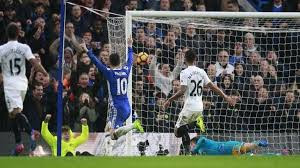 Back with the 9th installment of this series and missing the game today, I figured, Chelsea against Swansea was a cake walk. I searched the highlights of the game, and it was all bad. Not only did Pedro catch a body, but Cesc,  “washed up” Fabregas, in 2017, is still getting goals. I saw Diego Costa sniff out a goal for that golden boot check. Chelsea now ahead double digits…again.

Pedro came through with the best individual goal as he had an outside-the-box thriller that made my eyes go in more directions than Forrest Whitaker’s. I had to rewind this goal at least 10 times to get the full appreciation needed for this goal. It’s really THAT good. 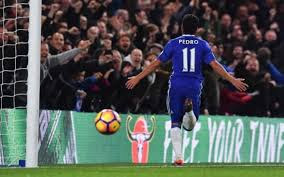 We jump to the 71st minute, and Pedro is receiving a pass from the midfield about 30 yards out from goal. In this position, most footballers would look for help, or freeze up when 3 defenders are around him. Instead, he takes the game to the Swansea defense. At the moment, the defenses looked confused, and end up watching as Pedro made his next move.

With exactly 71:12 on the clock, Pedro was witnessed at the scene of the crime, taking the pass from Fabregas in the midfield beautifully, and puts his head down and runs directly toward the middle with two key touches from his left foot. 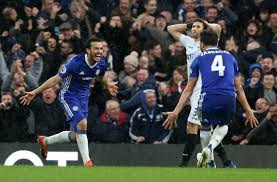 At 71:13 the ball is being shot with a top class FIFA bender that was right at the 2 and a half power bar meter. It is also whizzing past the center back at an alarming rate, in which he can only turn as he can feel the wind from the ball pass his face. At this exact moment, the goalkeeper is seeing this curve-ball coming his way and prepares to put a hand to it and keep it out of the net.

71:14 the ball has miraculously bounced right in front of where the goalkeeper dove to save it. Now it’s on a collision course with the bottom left corner of the net. One second later, the ball is buried in the top left corner of the net.  The goalkeeper, who is on the ground, sees that he has been beaten.  There is an old saying “There’s no defense for the perfect shot”, and Pedro proved that as Stamford Bridge erupts. Pedro is running in circles with a joy only a high-school kid, who has just lost their virginity, can understand.

Too bad Chelsea…..I’ve got nothin’. They are top of the table and are 10 points clear of the next best team. Too bad. I hate Chelsea, so hopefully they cough up that 10 point lead with 2 months to go.  I’ll cue up “Playa Haters Ball”* Ahh HATE HATE HATE, HATE HATE