Radamel Falcao was on the biggest stage of European football… 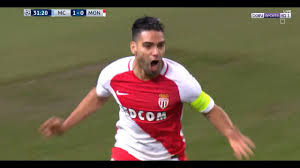 We back at it!

Day 7 and this is rolling easier than the dad from Snow day down the hill in the pivotal news camera scene where Hal pulled up from 30 to shoot his shot at Claire Bonner. I gotta watch that movie again now that I think about it.

Moving on to what we’re both here for: the goal that absolutely stunned me yesterday and I am still in a wide-eyed, shocked, emoji face. This one is one of the few that will come outside of the Premier League, but does it count if it happened in the Champions League, against a Premier League team? Judges have ruled in my favor. 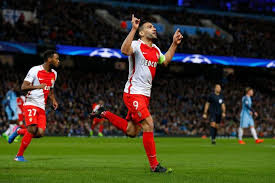 “I want to see a signature play.”

Out of the Yanited and Chelsea dog houses, Radamel Falcao was on the biggest stage of European football and decided that we’ve forgotten about him long enough, and that he needed to put on a show. That he did. Hell, the entire match was a show as both Monaco and Manchester City lit up the scoreboard with a score of 5-3. Manchester City up on aggregate.

There were many moments in this match where I thought to myself, “I want to see a signature play.” and as I continued funneling this thought in my head, the 60th minute had approached and I was dwindling in my viewership loyalty, getting ready to boot up my firestick when all of a sudden: 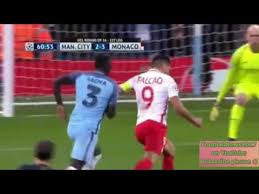 A long ball from a Monaco defender is launched down the left side of the pitch and bounces in the direction of a sprinting Falcao, only trailed by an equally as fast, John Stones. Somehow Falcao gets the ball under control while fighting off Stones to look up and prepare his next move. He didn’t need that long. As soon as he threw his first shoulder to evade stones, he hit a classic-button FIFA spin on Stones, shrugged him off once more and this is where my eyes got as big as Denzel’s on flight, when he looked in the mini-bar the night before his hearing.

As Falcao throws Stones down like a dollar store rag doll, defenders Sagna and Otamendi (who got cooked ALL night) raced to his aide to close down on Falcao. Falcao sees this movement and pushes a brilliant touch in the open space neither of them can reach. As this happens, the goalie knows that something awful can come about from this, and does what his training tells him to do, which is to pull up outside of his box and try to help his defenders shorten the area.  Wrong…..WRONG *Charlie Murphy voice* 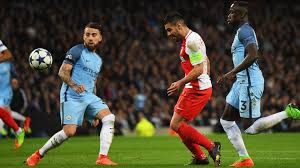 “Too bad that Falcao missed that BS penalty he was given with the worst PK approach I’ve seen….”

Falcao is now at the point where he is licking his chops but knows that he can’t get too excited and mash the power meter, so he does a slight turn to get even with the ball, and where he wants to aim on goal (this was an underrated move) and as the goalie looks to be right in front of his face, launches a beautiful back spin chip that sails right over the tall goalkeepers arms and bounces off the back of the net as Falcao knows he just hit a Champions League moment that could live forever.

Too bad Monaco’s defense was worse than a City back line who were just wondering around the pitch like a walking lick. Too bad that Falcao missed that BS penalty he was given with the worst PK approach I’ve seen since the Brazil team went full Mr. Krabs in the World Cup. Now the aggregate is 2 instead of 1. It should be 6-3 too–I can say City were cheated on a PK for a “dive” on Aguero. Too bad Falcao, too bad Monaco.