The cast (so far) of MTV The Challenge: Season 31 has been released, kind of, sort of. Some might describe it as leaked. Anyway, I’ve been scouring the internet all night to pull all the information together that I can. You see, the first round of contestants had to report today. TJ Lavin is back as the host. So, we can all breath a sigh of relief.

Note: This is a living document. I’ll update the list of cast members as things move forward!

The Challenge: Season 31 is AYTO heavy: I’m just beginning to remember who the current people from Are You The One? are to begin with. Now, MTV’s going to throw in a bunch of new people from Season 5? I can’t keep up with this, I’m getting too old. I do believe that we’ll see more and more of this in the near future. I don’t think there are currently any plans for a new Real World season. The Challenge however is a rating goldmine, so they need to keep the talent pool fresh.

I will admit that Britni from AYTO is starting grow on me. I follow her on twitter and it’s a wild time.

I’m stoked for the return of Brad. I have always found a weird charm about him. He also scored Tori, one of the all-time MTV babes. He wifed her up and they have two kids together. Fun fact, Brad and Tori recently got divorced and he is now romantically involved with KellyAnne, another all-time MTV babe. Oh, wait… KellyAnne also happens to be on this season? That explains a lot.

Let never forget when Darrell knocked Brad out. That was one of the worst fucking black eyes that I have ever seen. Life lesson: don’t fight a boxer. 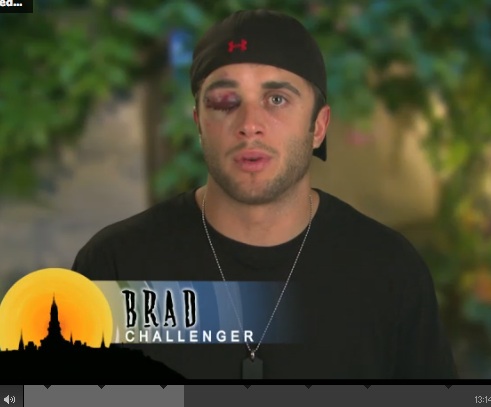 Listen, if my man CT is on a season of The Challenge. That means that I’m 100% in. MTV knows that I’ll be watching every second of every single god damn episode he’s on. You’ve got me MTV.