It’s day 3 of goal appreciation and this is actually easier than I thought. We re-visit a goal today, that solidified the then, 20 year old Dele Alli making an absolute top class goal out of a FIFA 1 on 1 skills practice simulation.

I will get this out of the way early and say how as a Tottenham fan, this goal was a season defining moment, even if it was against a declining Crystal Palace side. It was a dominant victory, and this piece of skill, mixed with the confidence of the young man, makes me hope and pray every day, that he doesn’t get bitten by the superstar bug like a former #11 that used to play for Tottenham that will go unnamed. All of these record breaking offers have made me sick, and if this is the last time I can yell “We’ve got Alli, Dele Alli!” before former #11 type numbers get sent to Daniel Levy’s office, I will continue to live through this goal to remember him by

The goal above clearly shows a 20 year old growing up right in front of of eyes. Yeah, I know that expression is way overused, but it is absolutely needed when you look at this goal.

When you see the opening of this video, it starts with Harry Kane on the right side of the pitch and sees that there is a play that can be made across the field. He then launches a cross to the left side of the pitch and Christian Eriksen sees the ball and makes a great play by heading the ball down perfectly to the aforementioned Alli.

Here’s where the David Blaine magicians comes around. As soon as the ball is headed towards Alli, he goes directly into training ground mode and with 3 Crystal Palace defenders around, he turns all of them into the “Mr. Krab’s meme” and puts it on his strong foot. 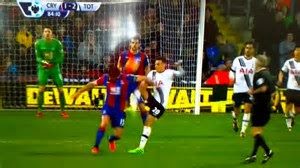 He see’s a CP defender racing toward him and lets instincts take over. As he bounces the ball off of his strong foot, turns counter clockwise to catch the ball on his weaker foot, and then bounces it up over his head as he is turning toward the goal.

Freeze frame this moment. As the ball is over his head, he is looking at the ball to try to line something up. Remember the defender that was racing toward Alli with fury? He is now behind Dele and now spectating as Dele is preparing to put on a show. 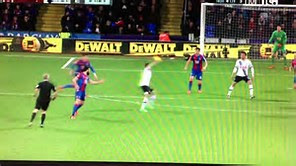 Back to the moment at hand. Dele has the ball dropping toward his foot, and as I looked at the video the second time, I can confirm that everything was in slow motion for him. He timed the drop on the ball perfectly and lined his shooting boot up with the ball and fires the ball through the spectators who were in the CP defense.

By the time anybody regained consciousness, the ball had flown into the bottom left corner of the net and Alli was celebrating, knowing that he was going to have the best VIP seat in any North London strip club of his choice.

Too bad Tottenham bottled that season by first letting Chelsea come back from a 2-0 lead to crush their Premier League title hopes, and then going to an already relegated Newcastle United, and getting a mud hole stomped in them 5-1.

P.S. It hurt to write that jab at the end. I do have closure for last year now though.