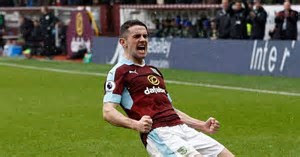 Back again for day 2 of the Goal Appreciation series. By the title, I bet you’re thinking “Tom Brady can make game time, pressure filled free kicks? Don’t worry, I thought the same thing until NBCSN showed his face.

His name is Robbie Brady (are we sure he isn’t Tom’s cousin?) and I know, unless you watch PL football religiously, you’re hearing his name for the first time.

He plays for Burnley, which I know is also a new team introduction for most of you, and I’m not even sure of his position (checked it, he’s a midfielder). But this goal…THIS GOAL is going to make me pay at least 5% more attention to Brady and Burnley.

This goal starts from 28 yards out and Burnley is lined up in the “Call for a second player” FIFA set piece toward the middle of the pitch. As I went back and watched this, I’m not sure how Chelsea didn’t see this coming. The second player had his hands on his hips and looked like he’d just entered “no mans land.”

Brady lines up like Sebastian Janakowski getting ready to kick an NFL field goal, with his left foot charging up like a Vegeta combo move that’s actually going to do some damage. 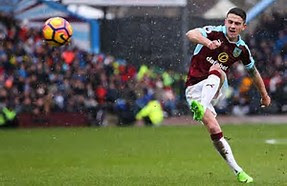 As soon as the ball is hit, it comes off the laces like a surface to air missile getting its first taste of sunlight. The movement of this ball was absolutely beautiful as it looks at first glance, like it will go wide, but then in a split second, looks like it was shot straight out of a gun from Wesley in the movie Wanted.

By the time the goalie or anyone on the pitch knew what had happened, Brady was watching the ball smash into the top left corner of the net , and Brady is running around Turf Moor like he scored his first Sunday League goal in front of his dad. Yeah, it was that magical

Too bad Burnley can’t take that act on the road as they are unbeaten in their last 6 at home, but can’t pick up a point on the road if it was lined up in that same set piece